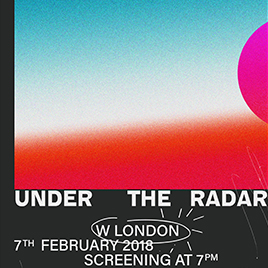 2017 was a memorable year for women in film. Not only did we see a change in dialogue about the position of women in the industry (resulting in some pretty knockout moments during the Golden Globes this week – hey Natalie, hey Oprah!), we’ve also seen more films (Ladybird and many more) enjoying widespread recognition from a worldwide audience.

So we can optimistically say, there’s never been a better time to be a female filmmaker than now.

Girls in Film have been working at the frontline for recognition of amazing work by talented young women in film for two years now. We’ve curated a number of unforgettable films in venues around the world, we’ve championed work online, and discovered some brilliant new talent.

In our new event with W London we want to share a sample of who we believe are to be the next big names to shake up our industry. We’ll be looking back at whose work gave us the feels this past year, and who we feel has huge potential in the future. We also keep it pretty varied (and fun) - signed and unsigned directors from UK and further afield across different genres.

On 7th February, join us for a screening of selected work at 7pm at The Perception (first floor, W London) ; the space is very limited, so please register your interest here by emailing hello@girlsinfilm.net by 1st February.

We will be opening the floor to other film obsessives you can mingle with while sipping on few drinks provided by us.