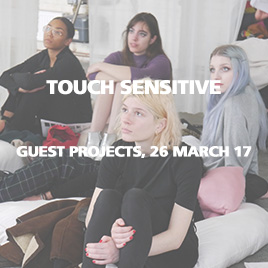 Screening of moving image works during an all-female art week.

Girls in Film presented a series of films exploring feelings that arise from the visual and physical experiences of the female form away from hyper sexualisation of bodies. The films were part of an installation inviting the public to sensually explore notions of private and public space.

Touch Sensitive is a series of individual art events, exploring representations of “female” bodies by dismantling the body as a category or “whole” and creating open channels for discourse. The body can be imagined as a database, a store accessible in various ways. Each iteration in the series is an entry into this vast, every increasing database through the concept of touch.

Touch is the sense of communication, it is the act of coming into contact physically, emotionally and metaphorically. It is an explorative act, much in the same way the female body can be explored, exploited, commodified, fetishised.

Through a series of art events developed by the curator and artists, the body is to be explored as a network of relations, without stop or centre. The first space we occupy to the fullest is our body, a space of which we should be able to claim agency. What meaning do we attach to it? How does it function socially, politically, sexually IRL and online?