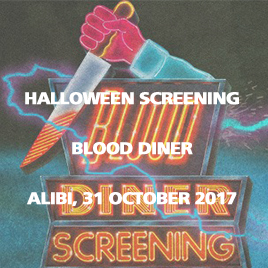 Fun gore fest by Jackie Chan for your Halloween pleasure

Hey it's Halloween, time for some fine 80s trash horror.BLOOD DINER is one of the best of the worst, funniest and goriest films you'll ever see. Two brothers (and their uncle who looks a lot like Krang from Teenage Mutant Ninja Turtles fame - yeah he's a brain in a jar) open up a restaurant that serves the best health food in town. Their secret? It’s all made from the people that they have killed in order to resurrect the goddess that they worship named Shitaar.It's so impossibly weird, gory, funny and irreverent, that it might just be your new favourite halloween movie. Shot almost entirely by female crew in 1987, before it became a thing, the director Jackie Kong made it as a parodical homage to the famous slasher movie Blood Feast.Watch the trailer to get the idea: https://www.youtube.com/watch?v=-UbzyHlojL8&t=25sThere'll be special bloody drinks and snacks on the evening and after the legendary Kenny, Callum & Alex from Phonica will be spinning tunes until well into the night.