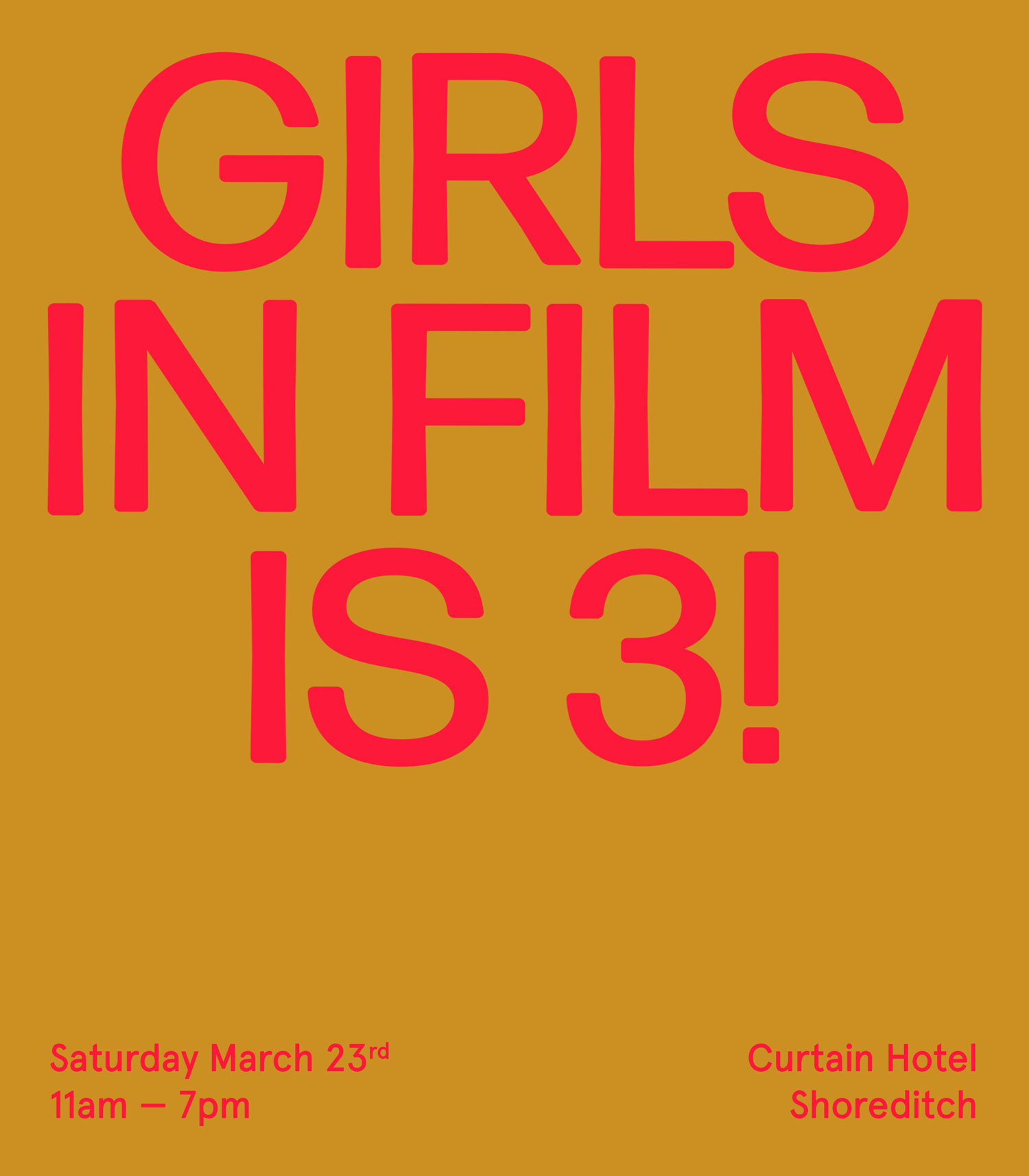 Girls in Film is 3! birthday all-dayer

Join GIF for a day of talks, workshops, live pitch sessions and screenings as we celebrate 3 years of Girls in Film, joined by some of the brightest names in the industry.

Join GIF for a day of talks, workshops, live pitch sessions and screenings as we celebrate 3 years of Girls in Film, joined by some of the brightest names in the industry.

SESSIONS
11am - 12.30am
How to be a badass documentary cinematographer with Illuminatrix Rising

Documentary cinematographer is a special kind of DOP. Whereas in narrative or commercial, the role is more defined and there is more time and crew to help with set up of the shot, the documentary DOPs find themselves putting on more hats and think on their feet. Cinematographers Simona Susnea, Luciana Riso and others from collective of trained female DPs Illuminatrix Rising discuss their experience and share their tips and tricks.

1pm - 2pm
Distribution - not just an afterthought: panel talk with filmmakers who did it right

Let's be honest, we all focus so hard on making our films happen that rarely we think where the film will land once it's finished and how many people will see it. What's your distribution strategy should be that question you ask yourself whether as a director or producer before or while you're making your film. Whether it's online self-distribution or festival-to-broadcast, there are many ways to get your film seen and this talk aims to enlighten you on how.

Your idea is only as good as how you can present it. We give five directors with a solid narrative film idea a chance to perfect the nerve-wrecking live pitch and present their idea to a panel of industry commissioners from Film London BFI Film Fund, Lush Studio and Film4. This is a rare opportunity to sit in on the feedback process and have an opportunity to see what things work and don't work for some of industry's biggest commissioning bodies.

Pitching and developing ideas for music video is incredibly creative but often frustrating experience when your idea isn't responded to. On our last GiF event we talked to commissioners about what they're looking for in good treatment. This time, we give our audience chance to pitch for a music video for artist from Sony label during a week prior to the event and choose five best treatments that we will give a throughout feedback on with the winning pitch given a green light on production of their idea.

The call for idea submissions to Pitch Perfect & Writer's Room will be open to Girls in Film members only but the event is open to wider audience to attend. If you are female or non-binary identified filmmaker you can request membership through our website.

A feature-length documentary from 1995 by one of the most prominent British documentary filmmakers Kim Longinotto about the lives of three transgender men who work at the New Marilyn Club in Tokyo, Japan. 53mins

Josephine Decker's film is one of the boldest and most visceral films that has landed in theatres last year. Feautring outstanding performances from its leading cast Miranda July, Molly Parker and newcomer Helena Howard, Madeline's Madeline is a head-spinning coming-of-age tale about artistic and emotional growth that poses hard questions on authorship and cultural appropriation. Film is released in UK in May through MUBI.


Venue notes:
Curtain Hotel does not allow food brought from outside but will be providing an affordable lunch menu catered to our attendees.
Please arrive from the members entrance on Scrutton Street