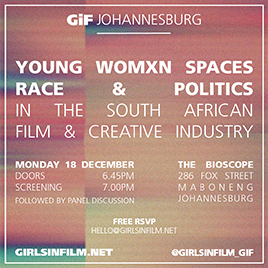 After hosting events and connecting young womxn in London, Prague and New York, GiF (Girls in Film) is hosting its first event in Johannesburg, South Africa.

In the first GiF event in SA, our host and speakers from Jozi creative community dissect the topic of young womxn spaces, race & politics in the South African film and creative industry.

How to inspire and create spaces for the young generation who don’t have access to higher education, how to address the issue of race and diversity, how to respond to the ongoing narrowing and commodification of what constitutes the 'political'.

Film works by the speakers will also be screened during the panel discussion.